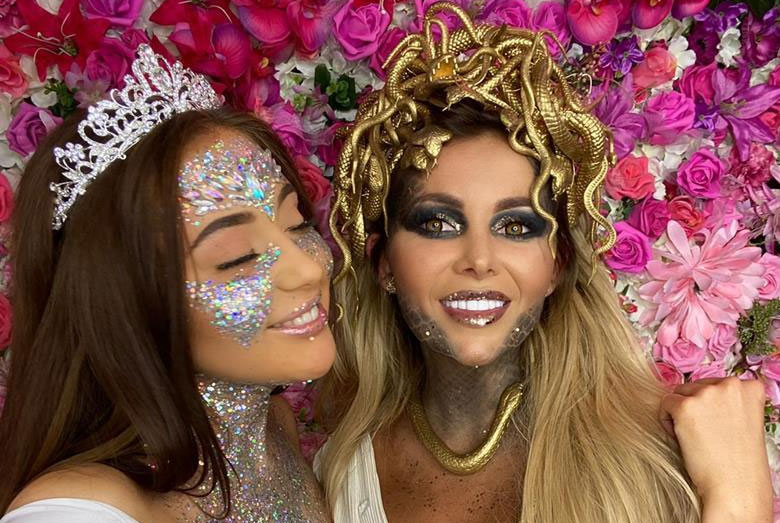 Step inside Longlox, the glorious Gateshead salon where Bev, SammyJo and their gang of seraphim stylists will make you Insta-ready

NOW it’s Christmas. Technically, Angels of the North (BBC Three) has nothing to do with the festive season, but trust me: you will feel as cheery after watching a 20-minute episode as you might after flinging back a mince pie and a glass of Baileys. And as you might with the mince pie and a glass of Baileys, you will undoubtedly follow it with a few more helpings and gorge your way to true happiness.

The celestial beings in question comprise seraphim 31-year-old SammyJo, who owns and runs Longlox salon in Gateshead, and cherub Bev, SammyJo’s mother and “mamager”, who oversee a fluttery host of teenage and twentysomething angels who are mostly called Lauren unless they are not.

The cherubim are all at different stages of learning to cut, colour and extend hair in the service of the goddess of beauty, remaking themselves and their clients in the one true image. The goddess of beauty requires thee to be Insta-ready at all times – smooth of feature, heavy of brow, tanned of skin and as lustrous of barnet as you can manage without falling over. All of this shall be given unto thee at SammyJo’s supersalon.

Longlox is an utterly joyful and maximally productive mix of family atmosphere and gulag. SammyJo and Bev know their stuff and they know exactly what their staff should be capable of and what attitude they should have if they are to make it in their world, and the wider one generally. They treat their employees as you would a large gang of teenage offspring for whom you want only the best. Whether they like it or not.

So, Kallie is half an hour late for the morning meeting and is duly carpeted. Bev explains what she has done wrong and how it has an impact on everyone else. It is exactly like being lectured by a mum, but one who is paying you. Which is to say, chillingly effective. But she finishes warmly (“I want you to think in your head – ‘I want to be proud of meself every day!’”) and once it’s done, it’s done. Kallie returns to the fold, Bev doesn’t harp on (“Get yourself out there,” she says, almost swatting Kallie on the bottom in loving exasperation as she leaves the office, “so you don’t have to shit yerself n’more”, and the child pulls her socks up.

SammyJo institutes a system of lanyards – silver at first, but you will be promoted to gold if you have the right stuff – and a Junior of the Week competition as spurs to ambition, especially for the latter trio. “All three juniors need a rocket up their arse,” says SammyJo, fondly.

For some of them – such as Saffron, who describes herself in one of the youngsters’ many individual pieces to camera as having always been “the only consistent adult in my house” – Longlox clearly fulfils multiple needs. And the girls themselves are each others’ role models, too. Saffron has just bought herself a car so she needn’t share her mum’s any more, and with Ashleigh before her as a home-owning role model, now has her sights set on saving for a house. When it comes to work ethic, they have 20-year-old Kendall to look to.

She puts in her shifts at the salon then helps her mum with deliveries four or five nights a week, and has a two-year-old daughter they look after between them. “It’s not the nicest of surprises, getting pregnant at 18,” she says. She told Bev first, so she could advise her on how to tell her mum. Bev advised her to do it face to face, but in the end she texted her instead. Everything’s all right now.

The programme is choppy, but not frenetic in its direction or structure. It wisely lets the energy come from the angels, who could power the National Grid if Bev just had a spare minute to work out how to harness them without impeding their reach to the chemicals trolley. The new girl, Shannon, from Northern Ireland, is a particular source of interest, because she has bobbed hair – this is like having a crewcut in Longlox – and a different accent. “Is it Shrek?” wonders Ashleigh.

It is a lovely series about a lovely bunch of people well-suited but not playing to the camera. There are various subplots – particularly about Tom, SammyJo’s boyfriend, Bev’s unfiltered opinion of whom we have not yet heard, but I live in glorious hope – but they don’t distract from the main picture. Which is of a group of girls having a great time, in a great place, looked after by each other and some great women. Let the herald angels sing.